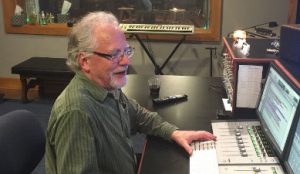 Tom Guild used to be on the radio, back when humans actually played vinyl records and spoke into microphones in real-time. So, it’s been awhile. During that previous life, Tom was also an occasional voice talent at SoundTrax Recording Studios. Eventually, he joined the SoundTrax staff as an engineer/producer, and has been here ever since.

Over the years, Tom has recorded and mixed hours of top-notch audio. His sound editing & mixing credits include “Lessons From The Journey” (detailing the amazing migration of Monarch butterflies, produced for the NC Museum of Natural History) and “Porsche By Design“, which was part of the exhibit of the same name in late 2013 at the NC Museum of Art.

In 2015, Tom narrated “The Year Of Pluto” for NASA films, about the deep-space New Horizons spacecraft, which visited Pluto in July 2015. This one-hour preview documentary has racked up almost one million YouTube views. At the end of 2018, this same spacecraft flew by an object almost 4 billion miles away, named “Ultima Thule”, probably the oldest (and certainly the most distant) object ever explored by humankind. Tom was honored to return as the narrator of a 2-part NASA documentary. It’s called “Summitting The Solar System”.

Most of the time, however, Tom’s on the other side of the studio glass, coaching, directing, editing and mixing countless projects for SoundTrax’s many clients. Since 2017, Tom also plys his trade as a volunteer for the Triangle Radio Reading Service. TRRS is a non-profit radio station that broadcasts news and other information for blind and visually impaired people. The broadcasts are heard using special radios that pick up a subcarrier signal from our local NPR powerhouse, WUNC-FM. You can also stream the broadcasts via the TRRS website, TriangleReadingService.org

Finally, Since 2010 Tom has been the President and owner of SoundTrax. As all small business owners know, this means a life of champagne wishes and caviar dreams. Except he hates caviar.